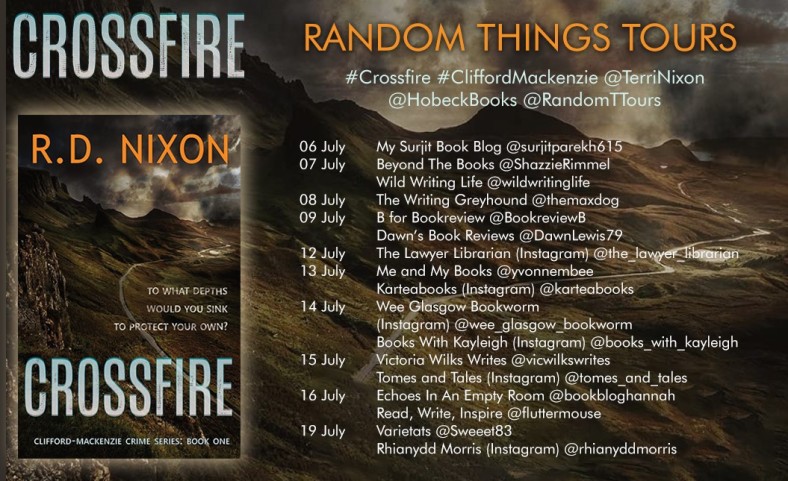 I am delighted to share my review today for Crossfire by R.D. Nixon. This is a wonderful crime thriller read that kept me entertained for a couple of days. This is the first book in The Clifford-Mackenzie series.

My huge thanks to Anne at Random Things Tours for my paperback of this fab book from the publisher, Hobeck Books.

To what depths would you sink to protect your own?

A prank robbery has fatal consequences.

Highlands town Abergarry is shaken by the seemingly gratuitous murder of a local man. The case is unsolved.

Ten-year-old Jamie, while on holiday in Abergarry with his mum Charis, overhears a conversation. To him, it is all part of a game. But this is no game and the consequences are far more serious than Jamie ever imagined.

Old wounds are about to be reopened

Struggling PI team Maddy Clifford and Paul Mackenzie find themselves involved by a chance meeting. How deep into those wounds will they have to delve to unravel the mystery?

This was such an interesting book full of much intrigue. Charis and her son Jamie are on holiday in Scotland, Jamie overhears a conversation and his curiosity gets the better of him. An old robbery, followed years later by a murder, now this random conversation overheard by a young boy! What is the connection and why are the Private Investigators Clifford and Mackenzie interested?

I will say that this story took me a while to get going with. There are a few characters to get to know and then there are the differing timelines. It was several chapters before I felt I got to grips with it. By then I was already more than intrigued and I wanted to know more, what the links were, what was hidden, why the crimes were committed and also what all the players were doing.

The author weaves quite a complex story, but as I mentioned, once I started to get an idea who was who then I was able to settle into the story much more and found a gripping mystery, crime and thriller. I found the pace picked up and so did the feeling of suspense.

The characters are a really interesting bunch, some you get a good feeling about, others definitely give off bad vibes and then there are those that you are not so sure about. This range of characters have their roles, there is a surprise or two in store and there is a feeling of something much bigger afoot as the story progresses.

Because the story flits across the timelines it adds a real air of mystery and towards the later stage of the book, there is a really tense atmosphere that you have been gradually been drawn towards. Part of the synopsis mentions what a person would do to protect their family, this is something that is really put to the test for a couple of the characters.

This is a story for those who like a more grittier mystery, it is a procedural in some respects but not police based as such. The Investigating team of Clifford and Mackenzie I really liked, and I am glad to see there is going to be more from them in future books.

A complex story to start with but then it soon became addictive and I needed to know how things would resolve. It is a crime, thriller, mystery and it is one I would definitely recommend.

Writing as R. D. Nixon. Terri Nixon was born in Plymouth, Devon, but during her childhood her family moved to the moorland village of North Hill in Cornwall. There, at the age of nine, Terri discovered a love of writing that has stayed with her ever since. She also discovered apple-scrumping, and how to jump out of a hayloft without breaking any bones, but no-one’s ever offered to pay her for doing those. Terri’s first commercially published novel was Maid of Oaklands Manor, in 2013, and since then she has published a further ten novels, with a twelfth due out December 2020. Terri also writes under the name T Nixon, and has contributed to anthologies under the names Terri Pine and Teresa Nixon. She has returned to Plymouth, and works in the Faculty of Arts, Humanities, and Business at Plymouth University… where she is constantly baffled by the number of students who don’t possess pens.

Check out the other stops on the Blog Tour…