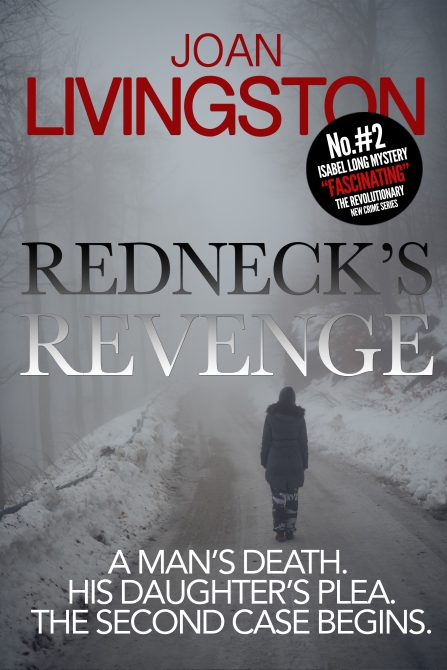 Today I am delighted to be one of the Book Bloggers to be opening the Blog Tour for Joan Livingston the author of Redneck’s Revenge as part of the Blog Tour with Rachel at Rachel’s Random Resources. In this guest post the author describes how to keep the attention of a reader when writing a second in the series novel. As a reader I don’t always read a series in the order, yes I know it’s bad but sometimes things just happen. So how do you introduce a reader to a series when they haven’t read the first book and also still keep it interesting to a reader who is already aware of the characters. A fine balance indeed is required. You can buy a copy of Redneck’s Revenge HERE.

Her next case. She’s in it for good.

Isabel Long is in a funk months after solving her first case. Her relationship with the Rooster Bar’s owner is over. Then the cops say she must work for a licensed P.I. before working solo.

Encouraged by her ‘Watson’ — her 92-year-old mother — Isabel snaps out of it by hooking up with a P.I. and finding a new case.

The official ruling is Chet Waters, an ornery so-and-so, was passed out when his house caught fire. His daughter, who inherited the junkyard, believes he was murdered. Topping the list of suspects are dangerous drug-dealing brothers, a rival junkyard owner, and an ex-husband.

Could the man’s death simply be a case of redneck’s revenge? Isabel is about to find out.

Well, you have to start somewhere. And when it comes to writing a novel, an author wants to grab the reader in the opening scene and hopefully they won’t get away.

My new mystery, Redneck’s Revenge, presented an interesting challenge. Since it’s the second in the series, I wanted to introduce my protagonist, Isabel Long, without boring people who read the first — Chasing the Case. Then again, I didn’t want readers who might have skipped the first going, “Huh, what’s she writing about?”

Isabel Long tells the story, so the novel is written in first person. She’s a former long-time journalist who took on her first case as an amateur sleuth because suddenly she had a lot of time on her hands after she got canned from her job as a newspaper’s managing editor. Besides, the disappearance of a woman 28 years earlier was her first big story as a rookie reporter when she was covering the hilltowns of rural Western Massachusetts where she lives.

She also has an unusual ‘Watson’ — her 92-year-old mother who came to live with her. Her mother has read enough mysteries and watched enough crime shows to help steer her in the right direction.

So in the opening chapter, Isabel making a pitch to Franklin Pierce, a licensed P.I. whose best days are behind him. I wanted to give readers a good first look at Isabel at this meeting. She’s smart and sassy. She won’t take crap from anybody. But she also cares. This will help her be a good P.I.

Here is a bit of the opener to Redneck’s Revenge.

Isabel Long. The man’s greeting was more of a statement than a question, but then again, Franklin Pierce is expecting me. He’s a private investigator and I need his services. It’s not what you think. I don’t have a case for him to solve. I want him to hire me for three years, so I can be a bona fide P.I. We are meeting at his office, which is just a narrow storefront between a Cumby’s – that’s Cumberland Farms to those who don’t live in New England – and a pizza joint. The sign on the window says:

Franklin Pierce is on the pudgy side, pushing seventy or more, maybe, with glasses and a double chin that hangs loose like a turkey’s wattle. He’s got to be about five-foot-two or shorter because I tower over him. Get this. He’s wearing a cowboy hat and a long canvas coat as if he’s a cattleman out West. But when he opens his mouth, he’s pure Yankee with those missing Rs and added Rs, plus a twang that says his folks have lived in this part of the world, that is, Western Massachusetts, since the white folks found it and the people who lived here before them.

He clutches a set of keys as I make my approach to the front door. Naturally, I was ten minutes early, my M.O., and waited in the car with my mother before he arrived. Yes, Maria Ferreira, my ninety-two-year-old mother, soon to be my ninety-three-year-old mother April 2, is with me. But when Ma saw Cumby’s, she hightailed it out of my car. She says she’ll go to the pizza joint afterward to get something to drink. She could have stayed home, but it’s February, and like the rest of us, she’s got a bit of cabin fever from the seemingly endless winter that began in October.

I smile and extend my hand to Franklin Pierce. I feel a bit self-conscious my skin is colder and rougher than his. I’m curious why someone would name their kid after one of the worst presidents so far although I can think of a few other contenders. But now isn’t the time to bring up that observation. I need to win this man over. So, what will it be: Franklin or Frank although I seriously doubt Frankie. I play it safe.

“Please call me Lin. And you? Is it Isabel or Izzie? Which do you prefer?”

I shake my head.

Thank you so much for this post Joan, sometimes coming back to a series requires a quick recap and for those new to a series who want to know a bit of what has previously happened, not feeling that they are missing out and also hopefully to entice them to buy and read the previous book/books.

Joan Livingston is the author of novels for adult and young readers. Redneck’s Revenge, published by Crooked Cat Books, is the second in the mystery series featuring Isabel Long, a long-time journalist who becomes an amateur P.I. The first is Chasing the Case.

An award-winning journalist, she started as a reporter covering the hilltowns of Western Massachusetts. She was an editor, columnist, and most recently the managing editor of The Taos News, which won numerous state and national awards during her tenure.

After eleven years in Northern New Mexico, Joan returned to rural Western Massachusetts, which is the setting of much of her adult fiction, including the Isabel Long series.