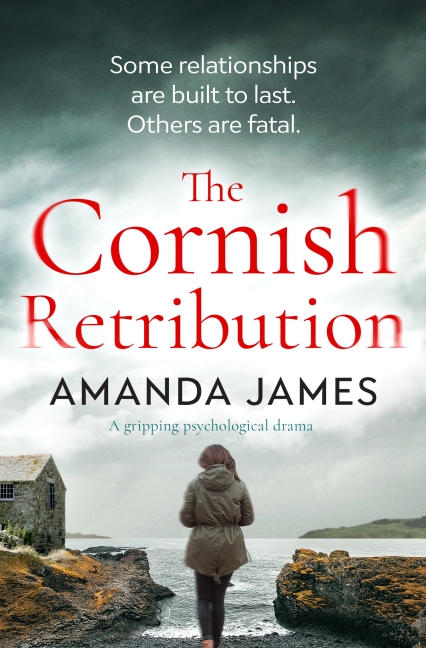 I am absolutely delighted to be sharing my thoughts on The Cornish Retribution by Amanda James as part of the Blog Blitz with Emma at Bloodhound Books. My thanks to Emma for the invite.

As soon as I saw an email for the new Amanda James book I didn’t read the synopsis I just grabbed my diary and scheduled the review straight in. I have read a few of Amanda’s books and I have not been disappointed. There are a few authors whose books I will automatically agree to be part of a Blog Tour/ Blitz for and Amanda is one of them 🙂

After a tragic car accident, Samantha is left widowed and bereft.  Her husband Adam was everything to her. But at least the home they shared together in Cornwall provides her with some security. Or does it?

Upon returning from a school reunion in Sheffield, where Sam met her old friend, Penny, and an old flame from her school days, Dan, she discovers that Adam had invested money unwisely and she is now penniless.

When Penny and Dan, who are now married, arrive in Cornwall to visit Sam, Dan comes up with a way in which Sam can keep the house. He suggests she turns it into a writing retreat. And he is willing to invest.

Despite his wife’s reservations, Dan gets his way but at what price?

Why is Dan so keen to help? Has Sam put herself in harm’s way?

Some relationships are built to last. Others are deadly.

Samantha (Sam) is recently widowed and struggling to deal with various things. She decides to attend an school reunion and meets up with Penny and Dan. They haven’t seen each other for many years and when Penny and Dan decide to visit. They find Sam isn’t quite as financially secure as she thought she would be and so a business partnership is arranged though not everyone is quite so keen …

One thing I have discovered with this author, no actually there are two things… one is the ability to keep me dangling as she weaves her story and the other is the spectacular setting descriptions.

The setting in this book is the Cornish coastline that provides its own range of characteristics that compliment the characters and the story in the book. The characters themselves are not all they appear to be and take routes I wasn’t expecting. What is a seemingly nice gesture and a friendly helping hand soon turns out to be something quite different.

As I read this book I found my emotions towards the characters changing, one moment feeling sorry for them and at others thinking they’re hiding something or being shocked at their actions.

As the characters were gradually introduced I did wonder how the connections would be made, they came across as nice, normal people…but what is normal? By the end of the book I had been manipulated into various beliefs and thoughts that had me chopping and changing as I read. I have to say the baddie was one that made my skin crawl as I discovered who they were and why they were doing the things they did. You will certainly work out your favourites.

I know this is my usual vague non spoiler review, but it has to be like this. I read this story on one sitting as I got hooked, willing some characters to see sense and hoping others would get their comeuppance. The story line held my  attention throughout and I really enjoyed that feeling of not quite being sure about who I could trust or what the truth would eventually be.

If you are a reader who likes a vividly described, atmospheric read that has a plot that has you guessing as it weaves and twists then this is one you should definitely read. A wonderful crime, thriller novel with a psychological edge, its devious, full of suspense, drama and manipulation and one I would highly recommend. 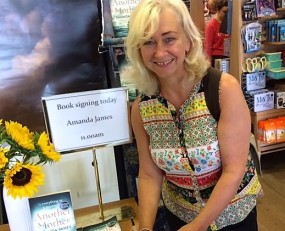 Amanda has written since she was a child, but never imagined that her words would be published, given that she left school with no real qualifications of note apart from an A* in how to be a nuisance in class. Nevertheless, she returned to education when her daughter was five and eventually became a history teacher. Then in 2010, after many twists and turns, the dream of becoming a writer came true when her first short story was published. Amanda has written many short stories and has six novels currently published.

Amanda grew up in Sheffield but now has realised her lifelong dream of living in Cornwall and her writing is inspired every day by the dramatic coastline near her home. She has sketched out many stories in her head while walking the cliff paths. Four of her mystery/suspense novels are set there, Somewhere Beyond the Sea, Summer in Tintagel, Behind the Lie and Rip Current. The Cornish Retribution is also set in Cornwall and will be published by Bloodhound Books in October 2018.

Amanda, known to many as Mandy, spends far more time than is good for her on social media and has turned procrastination to a fine art. She can also usually be found playing on the beach with her family, or walking the cliff paths planning her next book.

See what other Book Bloggers think by following the Blitz 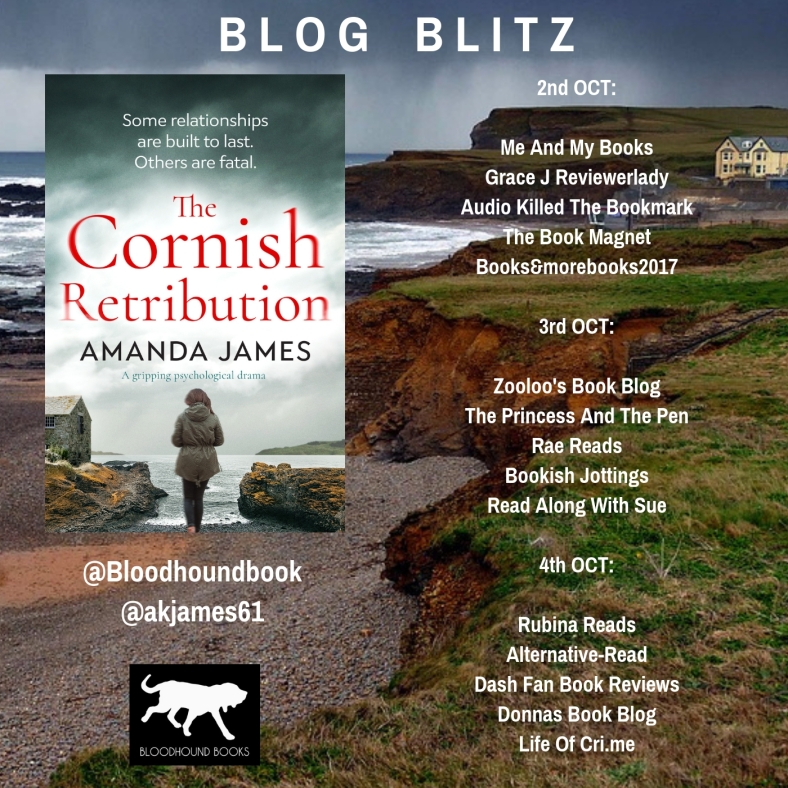 2 thoughts on “The Cornish Retribution by Amanda James #BookReview @Bloodhoundbook”