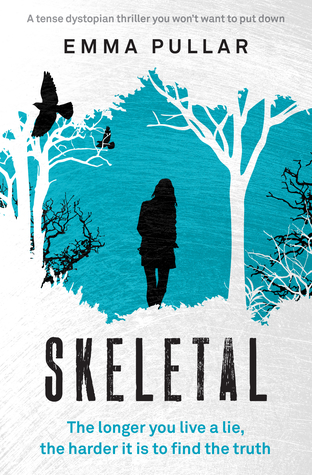 I am delighted to be sharing Skeletal by Emma Pullar this is a fabulous book , if you love dystopian fiction this is a book that you seriously need to read. I have to give a big shout out to the wonderful Sarah Hardy at Bloodhound Books for sending me this eBook to read prior to the blog tour for the next in this duology. I am so excited to be part of the tour for that one and to see what happens to Skyla and Gale City in Avian…..

Gale City is the last city in the world and under the strict control of the illusive Centrals.

When females reach adulthood, they’re given the chance to compete at Showcase for the honour of becoming surrogates for the Morbihan – a highly intelligent, obese race of people, unable to procreate naturally. All the other girls are excited to become hosts, all except Megan Skyla.

Convinced there’s more to life, Skyla teams up with an unlikely friend and they go in search of a cure for the Morbihan condition. Things don’t go to plan and their journey becomes a harrowing quest fraught with danger and deceit.

How can Skyla discover the truth when everything she’s been told is a lie? Can anyone in Gale City ever really be free?

Skyla is about to discover that freedom has a price and she’s going to have to fight to survive.

A dystopian story set in Gale City. A city of distinct areas depending on who you are. Privileged Morbihan, the workers or Skels, the guards, and the Mutti. Each has a purpose and for the female Skels if they are fortunate to be chosen, becoming a surrogate is something that is to be looked forward to, to elevate them from their harsh lives, but then Skyla isn’t most girls.

I am always a little bit wary when I begin to read a dystopian story, I wonder if it will be too technologically based and complex or being a bit too far-fetched. No worries with Skeletal, the author got it spot on for me.

Skeletal is addictive and from the very first pages I was drawn in an found myself eagerly turning the pages in this brilliant story. Skyla is a great character, she is strong-willed and eternally cautious. She doesn’t want to follow the herd but also has to appear to be like everyone else.

When she is placed with a Morbihan family she finally gets a glimpse at how the other half live and also gets to meet Bunce. Bunce is a Morbihan but as he nearing adulthood he is scared about what will happen to him. Skyla and Bunce are in some ways very alike and also different, you will get what I mean when you read the book. Between them they build up a bigger picture of how each other live, and I have to say that privileged doesn’t always mean having the better life.

I could really go on about this story a lot, but I am doing my usual vague ramble because I really do not want to spoil anything for other readers. What the author has achieved with this book is an ability to bring not only the characters but, also the setting of the story out with some vivid and imaginative descriptions. I found it easy to imagine the setting as I read. The city is one of contrasts between several groups of its inhabitants, it is brutal, harsh, and definitely not a place you would want to visit, but wrapped up within this is a sense of belonging to a community, of being part of something, it is a small sense, but it is there as the truth and trust is not freely given.

As the story progresses there is a real sense of something needed to be achieved by some of the characters, but a society that is oblivious to or that chooses to ignore the truth is one that will not willingly accept change. There are always those who would rather bury their heads in the sand than risk the unknown. As well as those that need change for various reasons.

This is a fantastic read that is at times shocking in its brutal nature but also has an emotional side to it. It shows “human” nature at its very best and at its very worst.

If you like dark and disturbing dystopian fiction then this is a book that you really need to read, I read this in two sittings but could have easily read it in one. It is a story that I would highly recommend and left me eagerly awaiting the next one; Avian.

Emma Pullar writes dark fiction and children’s books. Her picture book, Curly from Shirley, was a national bestseller and was named best opening lines by NZ Post. Emma has two short stories published in anthologies: A horror called ‘London’s Crawling’ and a dystopian tale called ‘Old Trees Don’t bend’. Her horror story, WORMS, was a Twisted Vol2 WINNER and her short Sci-Fi story, Alterverse, was a Singularity50 WINNER. Her debut novel, Skeletal, was published by Bloodhound Books in 2017. It’s part of a duology and book two is out September 4th 2018.
Her latest picture book ‘Kitty Stuck’ was published by A Spark in the Sand and illustrated by her twelve year old daughter, Beth Pullar.

I Read (a lot) and then Rant, Rave and maybe Review