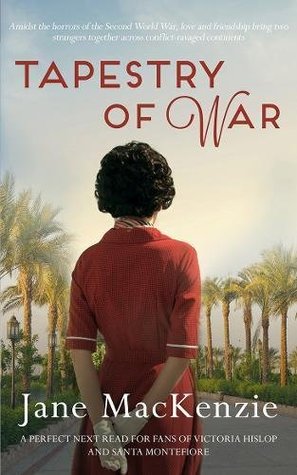 I am delighted to be sharing my thoughts today on Tapestry Of War by Jane Mackenzie. A Second World War setting for a story of love, war, loss and new beginnings. You can get a copy from most good bookshops and from AMAZON UK.

From the deserts of North Africa, to the waters of Scotland, the Second World War touches the lives of two women from two very different worlds. In Alexandria, Fran finds her world turned upside down as Rommel’s forces advance on the idyllic shores of Egypt. The life of luxury and stability that she is used to is taken away as she finds herself having to deal with loss, heartache and political uncertainty. Meanwhile, in the Firth of Clyde, Catriona struggles between her quiet rural life and her dreams of nursing injured servicemen on the front lines. As the war rages on, the two women’s lives become intertwined – bringing love and friendship to both.

With a dual setting of Scotland and Egypt during WWII you will get to meet to women. Catrina from the Scottish Island of Islay and Fran from Alexandria in Egypt.

This is a lovely story that follows these two women from very different backgrounds. The simple island life for Catrina is not quite enough and she wants to be a nurse, Fran is a socialite and journalists. The war is in full rage and really has an impact on these women as you would expect. It gives them an extra drive to do what is right, for one to become the nurse and the other to report on the war rather than propaganda version of it. The author references military events that kept me firmly rooted in the time of the story and the research has been done well, expressing not only details of events but also the views from a political aspect. This is all woven around the story of Catrina and Fran, their families and their friends.

War changes people and for the women of this story it made them more determined and gave them challenges and also opportunities they never would have had if it was a time of peace. There is a romantic aspect to this story, and while it is not a love-dovey one it does fit in with the story well. There is that uncertainty of will the partner return from war, will they be the same, will they still be in love and it really has been dealt with in a very realistic and for me felt right for the time. I most likely have a slightly stereotypical idea of life and love during war, but the way the author approached it felt right.

This is a book I would recommend to readers of Historical fiction, Historical Romance. A slower paced story that is well written, descriptive and emotional.

Jane MacKenzie has spent much of her adult life travelling the world, teaching English and French everywhere from the Gambia to Papua New Guinea to Bahrain, and recently working for two years at CERN in Geneva. She now splits her time between her self-built house in Collioure, France and the Highlands of Scotland, where she has made her family home.

8 thoughts on “Tapestry Of War by Jane MacKenzie @JaneFMackenzie #BookReview”