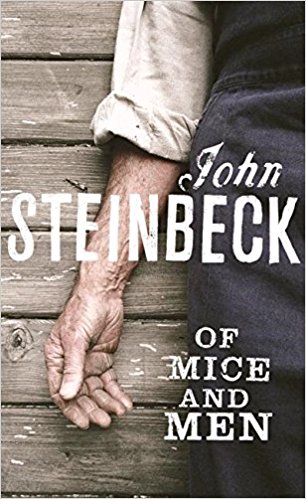 Today I have my thoughts on Of Mice and Men by John Steinbeck. It was a chance for me to take a dip into one of the classics, I had read quite a few of the classics a couple of years and never did quite get round to this one. I have read Grapes of Wrath and also Cannery Row and enjoyed them and gave me a chance to get a feel for the authors grim and gritty style. You can get a copy of Of Mice and Men from most good bookshops and online at Amazon UK, my copy is the Penguin Red Classics edition.

Drifters in search of work, George and his childlike friend Lennie, have nothing in the world except the clothes on their back – and a dream that one day they will have some land of their own. Eventually they find work on a ranch in California’s Salinas Valley, but their hopes are dashed as Lennie – struggling against extreme cruelty, misunderstanding and feelings of jealousy – becomes a victim of his own strength. Tackling universal themes of friendship and shared vision, and giving a voice to America’s lonely and dispossessed, Of Mice and Men remains Steinbeck’s most popular work, achieving success as a novel, Broadway play and three acclaimed films.

Of Mice and Men is the story of George and Lennie. They work various jobs and travel around looking for new work as one job runs out or they run out. The story begins as they head towards their next job. George has a dream to one day own his own plot of land and Lennie is happily caught up in this vision of the future. Lennie is a gentle giant of a man and is referred to as being not very bright but will work hard and do as he is told.

George looks out for Lennie and knows that many would not want a man like Lennie working for them, prejudice at this point in history is ripe so anyone being slightly different is not acceptable to many. Even though George is often frustrated by the simple nature of Lennie, he is a friend and will support him. They are each other has.

This is a simple tale of friendship between two men travelling for work. Rather than being loners as many travelling labourers are, they have a bond in their friendship, they are able to talk about their dreams for the future and it gives them hope. George tries his best to keep Lennie out of trouble, but this is not always possible and  misunderstandings do happen.

This is a quick read at only 121 pages and is easy to read in one sitting. It’s style is one I like, a slow meandering yet descriptive and emotional one. It explores various inequalities and prejudices that were relevant at the time. A wonderful read that slowly rolls along until it picks up speed as a sense of tension begins to build.

This is a book I would recommend to readers who enjoy American Social History, Literary Fiction and  Classic Fiction.

John Steinbeck is perhaps best known for Of Mice and Men and The Grapes of Wrath, which led to his Nobel Prize for Literature award in 1962. Born in Salinas, California in 1902, Steinbeck grew up in a fertile agricultural valley about twenty-five miles from the Pacific Coast: both valley and coast would serve as settings for some of his best fiction. In 1919 he went to Stanford University, where he intermittently enrolled in literature and writing courses until he left in 1925 without taking a degree. During the next five years he supported himself as a labourer and journalist in New York City, all the time working on his first novel, Cup of Gold (1929). After marriage and a move to Pacific Grove, he published two California books, The Pastures of Heaven (1932) and To a God Unknown (1933) and worked on short stories later collected in The Long Valley (1938).

Popular success and financial security came only with Tortilla Flat (1935), stories about Monterey’s paisanos. A ceaseless experimenter throughout his career, Steinbeck changed courses regularly. Three powerful novels of the late 1930s focused on the California labouring class: In Dubious Battle (1936), Of Mice and Men (1937), and the book considered by many his finest, The Grapes of Wrath (1939).

Being partly based on his own experiences as a travelling worker, Steinbeck originally wanted Of Mice and Men to be titled ‘Something That Happened’. The book explores themes of powerlessness, loneliness and empathy and received the greatest positive critical response of any of his works up to that point. It has achieved success as a novel, a Broadway play and three acclaimed films.

Steinbeck’s compassionate depiction of the poor in The Grapes of Wrath helped the book become an immediate publishing phenomenon, discussed on a national scale and becoming an instant bestseller. The book was described by the Nobel Prize committee as a “great work” and stated that it was one of the main reasons for granting Steinbeck the Nobel Prize for Literature in 1962.

Early in the 1940s, Steinbeck became a filmmaker with The Forgotten Village (1941) and a serious student of marine biology with Sea of Cortez (1941). He devoted his services to the war, writing Bombs Away (1942) and the controversial play-novelette The Moon is Down (1942). Cannery Row (1945), The Wayward Bus (1948), another experimental drama, Burning Bright (1950), and The Log from the Sea of Cortez (1951) preceded publication of the monumental East of Eden (1952)East of Eden (1952), an ambitious saga of the Salinas Valley and his own family’s history.

The last decades of his life were spent in New York City and Sag Harbor with his third wife, with whom he traveled widely. Later books include: Sweet Thursday (1954)The Short Reign of Pippin IV: A Fabrication (1957), Once There was a War (1958), The Winter of Our Discontent (1961), Travels with Charley in Search of America (1962), America and Americans (1966) and the posthumously published Journal of a Novel: The East of Eden Letters (1969),Viva Zapata! (1975,The Acts of King Arthur and His Noble Knights (1976), and Working Days: The Journals of The Grapes of Wrath (1989).

He died in 1968, having won a Nobel Prize in 1962.
Photo by Nobel Foundation [Public domain], via Wikimedia Commons.

4 thoughts on “Of Mice and Men by John Steinbeck #BookReview”