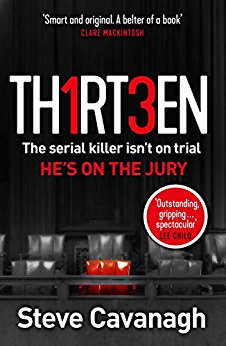 Today I am delighted to be sharing my thoughts on TH1RT3EN by Steve Cavanagh. It is available from all good book shops and also Amazon UK.

‘To your knowledge, is there anything that would preclude you from serving on this jury?’

Murder wasn’t the hard part. It was just the start of the game.

Joshua Kane has been preparing for this moment his whole life. He’s done it before. But this is the big one.

This is the murder trial of the century. And Kane has killed to get the best seat in the house.

But there’s someone on his tail. Someone who suspects that the killer isn’t the man on trial.

Kane knows time is running out – he just needs to get to the conviction without being discovered.

So the tag line for this is to the point, if that doesn’t grab you then check out the fabulous authors who also add their comments. I had seen so many reviews for this book from other readers and Book Bloggers that I had to get a copy to see what the fuss was about.

So admission time here… this is the first book I have read by this author, I do have three other books by this author in the Eddie Flynn Series and really must bump them up my TBR to read soon, this one works very well as a stand alone.

Eddie Flynn is a character I absolutely took to from the outset. He is one of those guys that has principles and he stands by them, putting himself in danger in the process. This is what he does to ensure he gets the absolute truth.

Kane, well what a sneaky, despicable and clever character this is. I loved to hate him, even if I didn’t know exactly which one he was on the jury. He is a character that blends in, an average Joe if you like.

Essentially this is a courtroom drama and it is a genre I don’t read that often but, when I do I enjoy them a lot. This felt so different to those I have read in the past because it is courtroom mixed in with thriller and crime that is in the present rather than in the past. In adding the threat in the present the author has managed to up the anti in the suspense, keeping the danger ever present is a great way to build up a sense of suspense for what may happen next.

I love the twist that the killer is on the jury and I did wonder how this would pan out over the story. This is where the author really has worked some imaginative magic. At no point did I know or even guess the identity correctly, I thought it would be a trial and error type of book where I would flit between the characters until I was reasonably sure I knew who it was…… no chance, not even close.

There are so many aspects to this book that I adored and worked for me; the pace, the plot, the characters and the … actually everything worked. It was set out in quick chapters and I liked the extra touch of the individual juror information included when the trial section of the book started.

I think the other good thing is that belief that not all trials are fair, that things can and are manipulated was something that interested me, that evidence can be seen in several ways and from different perspectives depending if you are for or against the bloke in the docks. The author has taken this manipulation to the next level and done it so well.

If you like crime, thriller, suspense and action in a courtroom drama then you should definitely have this book on your radar, it isn’t tied up with loads of jargon or red tape making it a book that you can lose yourself in easily. It is spectacularly deceptive and cleverly written and one that I would absolutely recommend as a must read book.

Steve Cavanagh is a critically acclaimed, award-winning author and lawyer. He is also one half of the Two Crime Writers and a Microphone podcast. His latest novel, Thirteen, is out in ebook now and paperback in June.