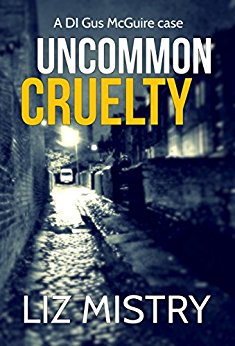 Today I have my thoughts on Uncommon Cruelty by Liz Mistry. This is the fourth in the DI Gus McGuire series and is set around Bradford, West Yorkshire. You can buy a copy from Amazon UK and it is available in eBook or paperback formats.

DI Gus McGuire and his team are called in to investigate the disappearance of a teenage boy after his parents return from a weekend away, to find their home trashed and their son missing. But that is just the beginning.

As the investigation unfolds, Gus must discover what links a violent bikers’ gang, a Muslim youth group and a fundamentalist American based Christian church.

Alongside this, two cases from the past come back to haunt DI Gus McGuire and his DS, Alice Cooper.

Gus has a lot to juggle, but will he cope?

Uncommon Cruelty is the fourth in the DI Gus McGuire series set in Bradford, West Yorkshire and is a gritty, Northern Noir read.

I have done my usual trick and not read any other books in the series and this is my first time reading this authors books. This book works well as a stand alone as the author does a very good job giving details on background so I didn’t feel I was missing out too much but, halfway through Uncommon Cruelty I had myself a little shopping trip and bought the other 3 in the series as I was enjoying it so much 🙂

So when parents come home from a trip to find their house trashed, their son missing and two bodies they immediately call the police. So enters Gus Mcguire and DS Alice Cooper to investigate.

I liked the dynamics of Gus and Alice, they are professional but also have a great banter and there is a good rapport with  fellow colleagues. This lifted the tone of the story at times and I think it worked well in what would be a stressful situation for those investigating.

There are little indications of past stories that are explained and this added to the intrigue for me. They have been added to give clarification to a reader who hasn’t read the previous books and do complement this story.

The plot covers so many different angles and takes trips down those pesky blind alleys that helped build up the suspense. It was as if I was being teased and being held just at arm’s length from the truth. Not only does the team have a tricky case to deal with but a past keeps poking their nose in.

The author did a fantastic job of leaving tantalising little clues giving an inking as to who it could possibly be and when the end arrives you definitely get to learn about the why of the crime.

This is a brilliant story that intrigued me, with several plot lines that twist and weave until you discover all the facts. A thoroughly enjoyable and addictive read that would be great for fans of gritty Norther Noir, crime, murder and mystery books. One I would highly recommend.

I am a crime writer based in Bradford but originally from West Calder in Scotland. I studied at Stirling University and taught in Bradford inner-city Primary schools for many years. I write gritty crime fiction drawing on the richness of Bradford’s diverse cultures and my writing is heavily influenced by Tartan Noir writers such as, Stuart MacBride, Ian Rankin and Val McDermid. I completed an MA in Creative Writing at the brilliant Leeds Trinity University. I currently have three novels published: Unquiet Souls (my debut novel) and Uncoiled Lies and Untainted Blood. I look forward to writing many more featuring my main character DI Gus (Angus) McGuire and his team. I am co-founder and lead blogger with The Crime Warp Blog