I am so delighted to be bringing you my thoughts on A Flicker Of Steel by Steve McHugh the second in The Avalon Chronicles as part of the blog tour with Anne at Random Things Tours. My thanks to Steve for my signed copy of his book and also to Anne for the invite to take part in the tour. You can purchase a copy HERE

Avalon stands revealed, but the war is far from over. For Layla Cassidy, it has only just begun.

Thrust into a new world full of magic and monsters, Layla has finally come to terms with her supernatural powers—and left her old life behind. But her enemies are relentless.

Sixteen months after her life changed forever, Layla and her team are besieged during a rescue attempt gone awry and must fight their way through to freedom. It turns out that Avalon has only grown since their last encounter, adding fresh villains to its horde. Meanwhile, revelations abound as Layla confronts twists and betrayals in her own life, with each new detail adding to the shadow that looms over her.

As Layla fights against the forces of evil, her powers begin to increase—and she discovers more about the darkness that lies in her past. As this same darkness threatens her future, will she be ready to fight for everything she holds dear?

As I have mentioned this is the second in The Avalon Chronicles and I would advise reading this series in order, you can purchase the first book A Glimmer Of Hope HERE . I really enjoyed the first book and it was a great introduction to this series, it laid the basis of things to come, you can read my thoughts on it HERE.

This is an urban fantasy with so much action in it than the previous book, this really does kick off from where the previous book left off. Layla has not only come to terms with but actually seems to relish her new-found powers. She is still wary abut completely letting go to them but is forming bonds with her spirits and embracing her lifestyle as the game players in the battles are becoming more known.

I love the way the author has used mythological characters, gods and deities, legendary figures dwarves, elves and a whole range of others to wrap them into an urban fantasy setting. I really like this meld of old and new to create a really addictive read.

It was great to be able to catch up with these characters once more and it didn’t take me long to get back up to speed with who was who, and I got to learn more about the key players. I do have a couple of favourites like Remy, Chloe and Harry as well as the main focus character Layla. They have a certain bond and ease with each other as they deal with what lies in their path.

The book is based around the age-old battle of good and evil and not everyone fits where you expect adding to the intrigue, though you do become aware of who the evil side is. The battle scenes and skirmishes have been wonderfully described to a point where I could visualise as I was reading. They are creative as the characters have some very particular skill sets, choices of weaponry and there is of course an element of magic, it always adds a bit of spice.

I would recommend reading the first book as there is a lot of information as to the how, why and who of the characters and it does do a great job of building a foundation for what is following.

I think this is a very accessible book as the names of characters can be pronounced at a glance, it has a setting that people would be familiar with and an ease with which it is read. I would highly recommend A Flicker Of Steel to readers who love Urban Fantasy, Fantasy, Battles, Mythological and Legendary Figures, Battles between Good and Evil with some great characters and a very addictive read. It is a brilliant story and I cannot wait for the next one.

AUTHOR BIO:  Steve’s been writing from an early age, his first completed story was done in an English lesson. Unfortunately, after the teacher read it, he had to have a chat with the head of the year about the violent content and bad language. The follow up ‘One boy and his frog’ was less concerning to his teachers and got him an A.

It wasn’t for another decade that he would start work on a full length novel, the result of which is Crimes Against Magic.

He was born in a small village called Mexborough, South Yorkshire, but now lives with his wife and three young daughters in Southampton.

See what other readers think by following the tour 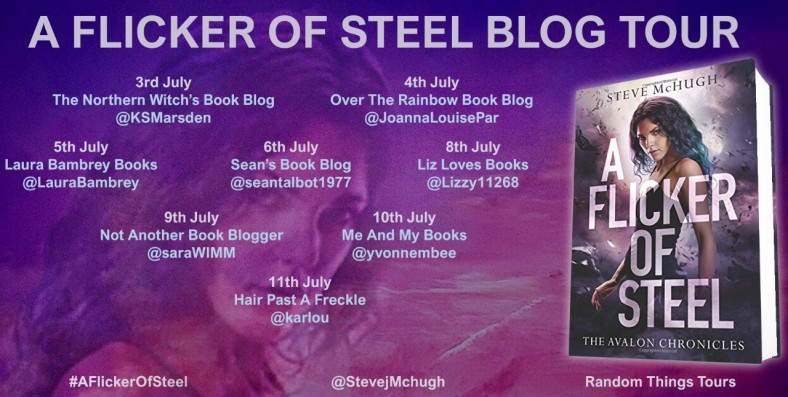