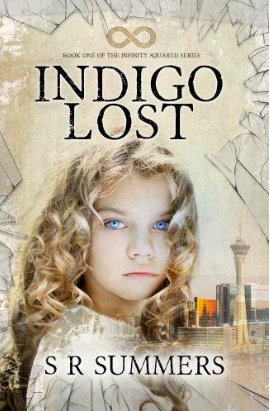 I am sharing an extract today for “Indigo Lost” by S R Summers for the blog tour by Authoright. Indigo Lost is available in hardback, paperback and eBook format from Amazon UK

After the brutal murder of her family, and the uncovering of her mysterious abilities, a young girl escapes and hides in the city of Las Vegas — but who is going to protect her?
Violence has always has always been familiar to seven-year-old Mysty, known for her piercing indigo eyes. Ever since she can remember her father has been an aggressive and brutish man, but then one day things go too far and Mysty witnesses the violent murder of her beloved mother. Taken in by the police for safety and questioning, she realises that she has nobody to turn to and can only rely on herself to survive. So, when she has the chance, she decides to make her escape; the only problem is she’s three ﬂoors up and it’s one hell of a drop. But seeing no other option, she takes a leap of faith out of the window and never looks back.
Meanwhile, in Las Vegas, the king of the city, cut-throat mob boss Donny Capello, is contemplating his next takeover when an out-of-control truck nearly crashes into him. Dazed, he notices a skinny young girl with bright blue eyes injured and crouching in a doorway, who he swears somehow saved his life, like a guardian angel. But before he can speak to her she disappears. Determined to ﬁnd out who the girl is, and why she would trouble herself to save someone as irredeemable as him, Donny Capello will do anything to ﬁnd her. But she’s not yet ready to reveal herself, and this time there’s no window for her to escape from, and Vegas is Capello’s city, so it’s only a matter of time before he ﬁnds her.
In the ﬁrst book of her epic Inﬁnity Squared series, author S.R. Summers has drawn on her varied life experiences and the challenges she’s personally faced —from work-place bullying to xenophobia— to craft not only a dramatic and, at times uncomfortable, narrative, but also one which provokes questions within the reader about their place in the world. Through the relationships between her central female protagonist, Mysty, and those she encounters, Summers hopes to highlight the importance of personal growth, the internal conﬂicts an individual experiences when faced with diﬀicult life questions, and the strength and empowerment of reaching out in life and making real connections and friendships rather than the at-a-distance relationships of today’s technology-mad world.
Blending elements of crime, fantasy, romance and coming-of-age with social ﬁction, Indigo Lost is the perfect next read for those looking for an exciting and thought-provoking new series to get stuck into this spring.

This extract comes from a scene between Donny Capello, mafia boss of Vegas, and our young central female character, a runaway child from a broken home who escaped a brutal end to a tragic domestic abuse case that claimed the lives of her sister, mother and grandmother. This is an important moment when she chooses a new name for herself, as her powerful new friend offers her a chance to get her life back on track. An opportunity she is only partially cognisant of, in her childlike innocence.

He got up and came back with a pad of paper and a pen, and slid it across the table to her right side, knowing she was right-handed, and looked at her.

“Will you write down what you will not tell me?”

Her face paled again and her heart pounded. Why did he have to ruin everything by asking her to do that? She didn’t want to do that. She squeezed her eyes shut. But the urge to wipe her soul clean of the pain, of the hurt and the blood, was growing within her. But why here is this room, with this . . . stranger?

“You don’t want to know what I know. I don’t want you to know.” It was a whisper. “Sometimes I wish I was dead too so I wouldn’t be able to remember.” She shook her head. “I can’t write it.”

“The man who killed your family, I can make sure he’s never able to come after you.”

Her eyes snapped open, and despite the emotion they were bright and alert now. “He’s in prison. I think he is, anyway.”

She shook her head. “No. I’m not a killer. Though he deserves to die a million times for what he did.”

It was a shaky whisper. It was clear the idea was tempting, but agreeing to more death was obviously unthinkable for her. And he didn’t want her to become blood-thirsty, he just wanted her to feel safe.

“Will you tell me your name?”

She picked up the pen and wrote the initials of her mother’s name very faintly, then crossed them out, not wanting to give away any clues.

“You can’t go through your whole life being a mystery with no name.”

Absent-mindedly she wrote the word ‘mystery’, doing an impressive slanted ‘M’ and two looping ‘Y’s. She tilted her head and crossed out some of the letters, and then rewrote the word she ended up with. She put the pen down and turned the pad around and pushed it to him.

“Then I’ll be a mystery inside a name.”

This was no average kid. He was going to have to get used to that.

“Fine. OK, Mysty, now explain to me another mystery: how do you survive those jumps off buildings?”

He crossed his arms and leaned back, looking at her with eyes that told her he wanted an answer and it had better be honest. Squirming a little under the scrutiny, she fiddled with her napkin while she tried to come up with a good enough answer.

About the author: Living in Leamington Spa, West Midlands, S.R. Summers owns and runs the popular ZouBisou cafe. Previously, she has enjoyed a career working within broadcast media whilst living in Belgium and within the ﬁeld of e-commerce. She also holds a degree in History from the University of Cambridge. When not managing her cafe, you’ll ﬁnd her busy writing and working on the ﬁnal book in her Inﬁnity Squared eight-part series. The ﬁrst in the series, Indigo Lost by S.R, Summers (published by ShieldCrest Publishing XX April 2018 RRP £20 hardback, £12 paperback and £5.99 e-book) is available to purchase from online retailers, including Amazon, and to order from all good bookstores. For more information you can follow the author @indigolost. 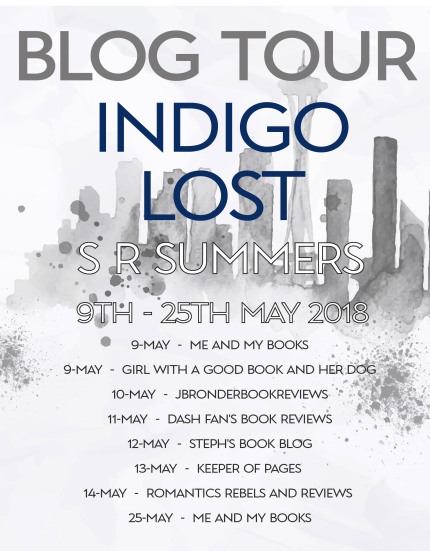