I am delighted to be sharing my thoughts on “Game Players” by Anita Waller today as part of a blog tour by Sarah Hardy at Bloodhound Books. It is available to purchase from Amazon UK. My thanks to Sarah, Anita and Bloodhound for my copy of the book from NetGalley.

When a gang of six children playing in their den in the woods spot a man burying drugs nearby, it marks the beginning of the end of their childhoods.

Unsure what to do, the children dig up the drugs and take them away. But when the dealer, who they watched bury the stash, shows up dead, the youngsters are thrown into turmoil.

Scared of what might happen, the children tell the police about the body they have discovered.

Meanwhile, a group of gangsters start searching for their missing drugs.

Well the synopsis definitely did the job for me when I agreed to read this book for the Book Blitz, it did not however prepare me for the journey contained within its pages and the emotions I would go through reading this story. Be prepared to put everything on hold when you pick up this book, for me it was a “one sitting read” a book that I could not put down.

The six children are a close-knit group and it was great to read a story about a group playing outside, making dens and basically building the bonds of a strong friendship. They definitely have each others backs and this really shows when they discover not only bag of drugs but then a body. They discuss the stages of what they will do and the possible outcomes of their actions. They did not however discuss every possible variable or outcome and I can say that I didn’t envisage the route this story would take.

This fast paced story had me with my heart in my mouth as I read how their childhood innocence was taken from them, the author has injected real emotion, feeling and absolutely shocking story lines within its pages as I read.

The children are fundamental to this story in making this story a really great read. The plot is twisted and although I am not going to give any details, believe when I say you will be horrified, shocked and if like me you really get into a story you will also go through the wringer. It is easy to follow and also quite detailed.

This for me was a book I absolutely loved. It had crime, mystery, suspense and murder that was wrapped around the story of six children and their families as well as a community. It showed the bond of friendship and how decisions they made were for their own justifiable reasons. This is an absolute Highly Recommended read from me. 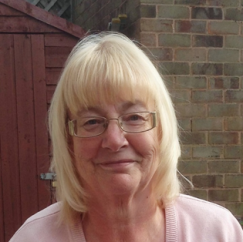 Anita Waller was born in Sheffield, South Yorkshire in 1946. She married Dave in 1967 and they have three adult children.

She began writing when she was around 8 years of age, writing ‘compositions’ at junior school that became books with chapters.

In 1995 she sent Beautiful to a publisher and as they reached the contract stage the publisher went into liquidation. As a result, the book was consigned to the attic in dejected disgust but in 2013 it was dragged out again for an enforced complete re-type. The original was written on an Amstrad 8256 and the only thing that remained was one hard copy.

Anita is not a typist and it was painfully reworked over two years, submitted to Bloodhound Books who, within three days of reading it, offered her a contract. 31 August 2015 saw its release into the wide world.

Following the outstanding success of Beautiful, she began a sequel on 27 December 2015, finishing it on 19 March 2016. The new novel, Angel, was launched on 7 May 2016.
34 Days followed, with its launch in October 2016. This was a huge success, particularly in the United States. While this, her third book in the psychological thriller genre, was flying out in all directions, she began work on her fourth book.

Winterscroft was a change in genre. It is a supernatural tale, set in Castleton, Derbyshire, and its release date was February 2017.

While she was writing Winterscroft, it became very clear from reading reviews that a sequel to 34 days was needed, and she began work on that. Bloodhound Books launched Strategy, on 10 August 2017.

Her next book, launched February 2018 and entitled Captor, is a psychological thriller, set exclusively in Sheffield. It was an instant success, both in the UK and the US.

The along came Game Players… once more set in Sheffield, the story involves a group of six children who have each other’s backs to a remarkable extent. The darker, criminal side of Sheffield is explored, and the book launch is 18 May 2018.
In her life away from the computer in the corner of her kitchen, she is a Sheffield Wednesday supporter with blue blood in her veins! The club was particularly helpful during the writing of 34 Days, as a couple of matches feature in the novel, along with Ross Wallace. Information was needed, and they provided it.

Her genre is murder – necessary murder.