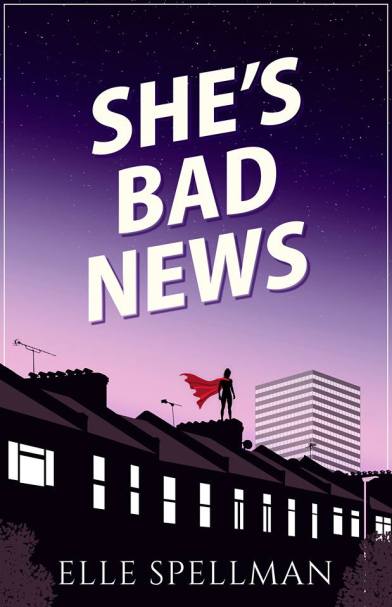 Today I am hosting an extract for “She’s Bad News” by Elle Spellman. My thanks to Rachel at Rachel’s Random Resources for my spot on the tour. Purchase links for the ebook are: UK: Amazon ~ US: Amazon.

What would you do if you woke up with super powers?

For Bella Brown, life hasn’t gone according to plan. She’s almost thirty, still living in her uneventful hometown, and her dreams of becoming an investigative reporter have fallen by the wayside.

That is, until she wakes up one morning to find she’s been gifted with some amazing new abilities. What’s a girl to do with heightened senses, super speed and the ability to lift a truck one-handed? Bella quickly discovers that her new powers can easily help her land front-page leads at local newspaper The Hartleybourne Gazette.

Soon Bella’s out every night chasing down local criminals for stories, while keeping her powers a secret from everyone besides flatmate Chloe. But when a burglary-gone-wrong accidentally turns her into the mysterious Hartleybourne Heroine, Bella finds herself on the front page for the wrong reasons. Her secret becomes harder to keep as she tries to track down the source of her powers, and especially when crime reporter Matt Gilmore is intent on unmasking the town’s new vigilante…

Suddenly, having an extraordinary life is far more dangerous than she ever imagined.

She’s Bad News follows Bella Brown, an aspiring journalist in a small town who thinks that luck is against her – that is, until she wakes up with super powers.

In this extract, Bella is trying to track down the source of her mysterious new abilities. Thinking that a diet pill could be responsible, she turns up at SegPharma, the company responsible for manufacturing the tablets, to try and find out more…

One thing was for certain – this place wanted to blend into the background.

Tentatively I stepped out of Delilah, grabbed my bag from the passenger seat and made my way across the car park towards the door, surveying the place. What was I even expecting, some Willy Wonka-like factory that claimed to make all your dreams come true? Probably. Though I knew from my investigation into BodiBurn that companies like this much preferred to lay low.

Taking a deep breath, I pushed the buzzer and waited. No response. I could hear noises from inside, from the back of the building that, I now realised, was particularly long as well as tall. The back, I presumed, was where the products were made. I jabbed the buzzer again, twice just to be on the safe side.

“Hello, SegPharma,” a male voice crackled from the intercom.

“Hiii!” I said excitedly. “I’m looking for the company who manufactures NARCIS products. Would that be you guys?”

“What is this regarding?”

I stood on the spot, looking up at the small security camera above the door. This was my chance, and I couldn’t blow it.

Having thought about my predicament, I had decided not to rush in and tell all about my P-word. Going in guns blazing would be way too risky. It’d be far too easy for SegPharma, or NARCIS, to deny it; after all, landing abilities like this could also land me grounds for immense compensation. Not that I wanted money – I just wanted answers. And, as I’d previously learned from BodiBurn, asking for the truth straight out often led to nothing. So I was going to try a different method.

“Oh! Well, it’s a bit of a long shot really,” I said, in the perkiest voice I could muster. “I’m a health and beauty journalist from a top women’s magazine! I’m looking into some of the nation’s favourite and most talked-about slimming aids, and of course, you’ve made the top spot! So I was hoping to have a chat with someone about the latest NARCIS range. My colleague has some and says they’re totally life-changing!”

Okay, white lies seemed to be my forte of late. I just hadn’t lied this hard before.

“Wait in reception, please,” the voice said curtly. Let’s face it, I could kick down the door with minimal effort, but I was at least trying to stay civil. The door opened with a click. I was in.

Flattery gets you everywhere.

I stepped into a small reception area, where a young man in a smart grey shirt covered by a white lab coat greeted me from behind an overly-clean white desk. I looked around, taking in the bland, somewhat clinical surroundings; white seats, coffee table decorated with leaflets, generic ornamental pot plants. The usual.

The man looked me up and down, no doubt wondering why some random woman had turned up out of the blue to their hidden headquarters on a desolate industrial park. “In case you’re wondering,” he said, arms folded, “we are a cruelty-free company. We keep any testing to a minimum, and ensure no animal is truly harmed.”

“Truly. We only test on animals when absolutely necessary, and even then, it’s not lethal.” He shot me a look that said, ‘So there. Ner-ner,’ but not before stealing a quick glance out the window to see if a small army of my picketing mates were waiting outside to storm the place.

“Thanks for the clarification, but that’s not why I’m here.”

There was a flicker of dismay on his face. It was so quiet in the building that maybe some sign-wielding protesters from PETA would have brought some much-needed action to his day. “That’s good. Just a prior warning. Wouldn’t want any trouble. If you’re a journalist, I’d be curious to know what kind of story you’re working on.”

“Like I said, one of your products has become one of the most popular in the UK!” I said, trying to keep up my perky attitude and Stepford-like grin. “So I just wanted to have a chat with you about the NARCIS range. The Ultra-Boost range in particular. It’s become quite a hit…”

“Honestly? I don’t think anyone here is likely to help you. The products are developed here at SegPharma, but the brand itself is based elsewhere. If you need Sales and Marketing, you’d be better off speaking to – “

“To Alexis Dean. I know,” I smiled, leaning in closer. I could hear the soft thud of his heart beating as he stood behind the desk. “I saw her on TV just yesterday. The thing is, I’m having a bit of trouble with tracking her down. Do you know how hard it is to speak to someone at NARCIS Life Solutions who isn’t a robot trying to sell me stuff? It’s nigh on impossible. I’m on a tight deadline and so lucky I managed to find you guys! I’ll be writing an intriguing piece on the brand, an article that gives an insight into what you actually do, you know? I want more than just PR. While Alexis is busy fielding off the controversy about those ‘body-shaming’ ads, I’m going to try and dispel that. Really get behind the brand. I’m giving you a great opportunity here. Are you going to throw that away?”

The man looked at me, speechless, as I realised that was probably the most persuasive pitch of my career, and I was only pretending.

Elle Spellman is a writer and comic book geek living in Bristol, UK. She’s been writing since a very young age, spending her childhood afternoons penning stories about fictional adventures, and illustrating them too.

Now, Elle tends to write contemporary fiction with kick-ass heroines and a little bit of magic. She’s Bad News is her debut novel, and she’s just finished working on her second. Her other interests include running, wine, red lipstick, the paranormal, and all things Batman.

See what others think and follow the Blog Tour