Bandit Country by Andrew Turpin, the third book in the Joe Johnson series.  Available from Amazon UK HERE in paperback of eBook format.  Buy the box set and read The Last Nazi, The Old Bridge and Bandit Country HERE.

A trail of high-profile sniper victims across Northern Ireland. Rising tension over the US president’s imminent visit. And the on-going bloody conflict driven by republican terrorists.
Ex-CIA war crimes investigator Joe Johnson quickly realizes there’s much more to it after he’s called to Belfast by a man who claims to be worried about the impact on his business of a long series of terrorist bombs and shootings.
The sniper’s body count rises, but with his motive remaining a mystery, fears mount as the president and UK prime minister’s visit for a G8 world summit draws nearer.
Eventually, Johnson and his ex-MI6 colleague Jayne Robinson come to believe that the key lies in files, documents and secrets from nearly thirty years ago that certain high-flying public figures would rather remained unread.
Bandit Country—the third book in the Joe Johnson series—dives into the murky depths of historic conflicts between British security forces and the IRA, as well as the illegal US-based fundraising and weapons smuggling operations that armed the terrorists.
Meet Joe Johnson today and discover how he uncovers hidden truths from the past in an effort to prevent another devastating crime happening now.

Joe Johnson is back! This time in Northern Ireland. He has a freelance job offer that has connections to troubles in Northern Ireland from the 1980’s. Now 2013, the political stage has changed, Sinn Fein have political positions and there is a peace agreement in place.  Not all feel hopeful about the future and grassroots dissidents still make their feelings known with bombings and shootings, this affects business and is the reason why Joe has been called in.

I am a big fan of this series with Joe as the main protagonist, an ex-CIA war crimes investigator. This book feels a little bit different to the others, a slight step away from the war crimes investigations with more emphasis on events at the time of its setting in 2013, there are however many references to 1984, as well as other decades that are just as important.  Joe is soon in the thick of the action, his experiences, expertise and knowledge are all assets that he will need.

It is a story that covers many aspects of IRA, The Real IRA, Sinn Fein and also the thoughts and feelings of the people on the streets.  The mistrust, the distrust and the fear to hope things will actually change for the best as well as showing the frustrations of the dissidents at grass root level.

As the story moves forward the inclusion of arms shipments, smuggling and also US backers for the cause make an appearance as Joe tries to learn of an active sniper. This along with the added extra details that the author includes adds that believable factor I like in a story.  Things like how fast the helicopter flies rather than it just flying past, or why two guns of the same model have slight differences. These extras make me think that the author knows his stuff and done the research. The one thing I always enjoy with this authors work is the addition information he includes at the end of the story, where he found his sources, what books or sites he used. A great place for further reading and a great insight into the background of the book.

You could read this as a stand alone, it would work well I think, but I would definitely recommend reading the other books in the series. They give a great deal of information about Joe and importantly show his tenacious character.

This is a fast paced, action packed, thriller.  The author has created a balance of fact and fiction backed up with a huge amount of research and is the backbone of this book, add to that an amazing story that has been fictionally wrapped around events and you have a convincing read.  A Highly Recommended read from me.

Andrew is a former journalist who has always had a love of writing and a passion for reading good thrillers. Now he has finally put the two interests together.

Who is Joe Johnson? He’s an ex-CIA officer and former U.S. Nazi hunter with the Office of Special Investigations, part of the Department of Justice in Washington, D.C.
Johnson has a passion for justice and a drive to investigate unsolved war crimes in different parts of the world. In particular, he is frustrated by the sectarian and religious conflicts that generally lie behind such crimes.

The themes behind these thrillers also pull together some of Andrew’s other interests, particularly history, world news, and travel. They explore the ways in which events and human behaviors deep into the past continue to impact on modern society, politics and business.

Andrew studied history at Loughborough University and worked for many years as a business and financial journalist before becoming a corporate and financial communications adviser with several large energy companies.

He originally came from Grantham, Lincolnshire, and lives with his family in St. Albans in Hertfordshire, U.K. 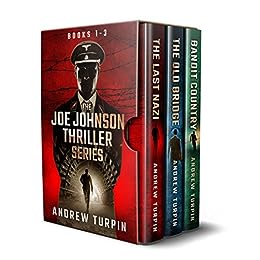