I am delighted to be part of the blog tour for “A Spell In The Country” by Heide Goody & Iain Grant.  Published by Pigeon Press and available in paperback and eBook format.  My thanks to Rachel at Rachel’s Random Resources for my spot on the tour.

“Dee is a Good Witch but she wonders if she could be a better witch.

She wonders if there’s more to life than Disney movie marathons, eating a whole box of chocolates for dinner and brewing up potions in her bathtub. So when she’s offered a chance to go on a personal development course in the English countryside, she packs her bags, says goodbye to the Shelter for Unloved Animals charity shop and sets a course for self-improvement.

She likes to find the easy path through life: what her good looks can’t get for her, a few magic charms can. But she’s bored of being a waitress and needs something different in her life. So when a one night stand offers her a place on an all-expenses-paid residential course in a big old country house, she figures she’s got nothing to lose.

Jenny is a Wicked Witch. She just wishes she wasn’t.

On her fifteenth birthday, she got her first wart, her own imp and a Celine Dion CD. She still has the imp. She also has a barely controllable urge to eat human children which is socially awkward to say the least and not made any easier when a teenager on the run turns to her for help. With gangsters and bent cops on their trail, Jenny needs to find a place outside the city where they can lay low for a while.

For very different reasons, three very different witches end up on the same training course and land in a whole lot of trouble when they discover that there’s a reason why their free country break sounds too good to be true. Foul-mouthed imps, wererats, naked gardeners, tree monsters, ghosts and stampeding donkeys abound in a tale about discovering your inner witch.”

Three seemingly unconnected witches are approached by a rather bizarrely dressed flaming hat wearing man called Madison.  He offer them a free 3 week retreat after they had completed a survey.  There they meet other witches, only they do not mention they are witches initially.  They discover they are the first for a course on trying to make them all more modern and progressive.  So, with a free course, a huge house, witches, spells you know something is going to go awry!

This is a great read with good mystery and mayhem added into the boiling pot (or should I say cauldron).  The mystery and mayhem pretty much start from the outset as we are introduced to the women, it has a humorous feel to it at times but with an underlying feeling of something not being right.  I am a great believer of “you don’t get anything for free” or “you don’t get ‘owt for n’owt”, this is the case with the witches.  But even though there are things going on, they do build a bond and form friendships and I think they definitely benefited in a round about way from the course.

There are several characters that are both human and definitely non human, I have to admitting to liking a certain little chap called Jizzmus the best.  He is rude, crude says the most inappropriate things and just really appealed to my sense of humour with his antics. There is a plot that gradually unfolds in this story that I am not going to delve into as I don’t want to spoil it for others, but it has darker and wicked elements.  This is a really well paced book with quick chapters.  I did however find myself backtracking a couple of times as I lost track of which character I was following, but I think this is more a kindle thing as I didn’t always notice the line breaks as the characters were alternated.

A great cosy paranormal mystery read that I really enjoyed.  Some really imaginative and well described characters, good plot and well paced.  This is a book I would definitely recommend.

Heide Goody is the stupid one in the writing partnership and Iain Grant is the sensible one. Together, they are the authors of seven novels, two short story collections and a novella.

The ‘Clovenhoof’ series (in which Satan loses his job and has to move to Birmingham) has recently been optioned by a Hollywood production company. Their latest novel, Oddjobs 2: this time it’s personnel, was published in August 2017.  Heide and Iain are both married, but not to each other. 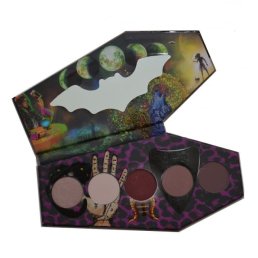 The package, worth over £100 contains…

**Check out the thoughts of other Bloggers on the tour**

Many thanks for reading my post, if you liked it please give it a share.  Or go and get a copy of this book 🙂 xx