I am delighted to be sharing my thoughts for the 2nd in the “D.S Bliss” series.  “The Scent of Guilt” by Tony J Forder is published by Bloodhound Books and available to purchase from today in eBook format from Amazon UK.  My thoughts on the 1st in the series “Bad To The Bone” HERE. My thanks to Tony and Sarah Hardy, for my copy of the book and my spot on the tour.

Looking for an unmissable crime thriller?

Twelve years after he left Peterborough under a cloud, DI Bliss returns to the city and the major crimes team. Having spent years policing organised crime, Bliss is plunged straight into the heart of a serial murder investigation.

Meanwhile, Penny Chandler has been promoted to DS and has been working in

London on the Met’s sexual crimes team. But when two rapes are reported on her old patch in Peterborough, Chandler volunteers to interview the victims.

Chandler joins the hunt for the attacker and soon notices a possible link between the rapes and Bliss’s murder investigation.  Could the same man be responsible?

Just as both cases seem to stall, a call comes in from an ex-policeman who knows of unsolved cases in the USA with a similar MO. Bliss finds himself travelling to California to hunt for a killer whose reach may have stretched further than anyone could possibly imagine.

But in order to catch the murderer, Bliss must discover the killer’s motive. A motive which should have remained buried in the past…

Also available in the DI Bliss Series: Bad to the Bone

Tony J. Forder is the acclaimed author of Degrees of Darkness and Scream Blue Murder. The stunning DI Bliss series are fast-paced police thrillers which will appeal to fans of authors like Michael Connely, Joy Ellis, Faith Martin, Robert Bryndza and Angela Marsons.

The 2nd in the D.S Bliss series sees the story 12 years on from the first book Bad To The Bone.  D.S Jimmy Bliss makes a return to his old stomping ground and his old job.  With the investigation of a strange and brutal murder, Bliss and his team investigate.  D.C Penny Chandler makes a return to Peterborough.   The case she is working on, while  on secondment in London may have a link to her old mentors case.

This can be read as a stand alone, but it definitely helps if you have read the first to get a feel for the history and backstories.  I read this book straight off the back of Bad To The Bone so it was still fresh in my head.  There is a time difference of 12 years between the two stories, my reading difference was 12 hours so it did take me a while to get into this one. Once I got my head around this time difference I was off and running.

There are a few old faces, but also some new ones as you would expect.  This has a different feel, it is more darker, sinister and more intricate.  It has several plots running through it that twists together that has the investigators trying to work out the why’s and the who’s.  I do admit to having an inkling as to who the “who” was, but never completely convinced I was right.  The story had some surprising twists and went down routes I didn’t expect therefore keeping my interest right the way through. I liked the dynamic of Bliss and Chandler in the first book, and was pleased to see a return of that in this one. Bliss is investigating a much darker feeling story than the last one, and with Chandler being on secondment to a sex crimes department, you know this is going to be more sinister.  So be warned!

This is a book I would definitely recommend to readers who like police procedural crime, murder, mystery and thriller books.  Dark, brutal and sinister that will have you avidly turning the pages.

Tony J Forder is the author of the critically acclaimed crime thriller Bad to the Bone, the first in a series featuring DI Jimmy Bliss and DC Penny Chandler. The sequel, The Scent of Guilt, is available from 17 February 2018. A third book in the series is currently in progress.

Tony’s dark, psychological crime thriller, Degrees of Darkness, featuring ex-detective Frank Rogers, was also published by Bloodhound Books. This was intended to be a stand-alone novel, but Tony is now considering the possibility of a follow-up.

One book that will definitely see a sequel is Scream Blue Murder. This was published in November 2017, and received praise from many, including fellow authors Mason Cross and Matt Hilton. 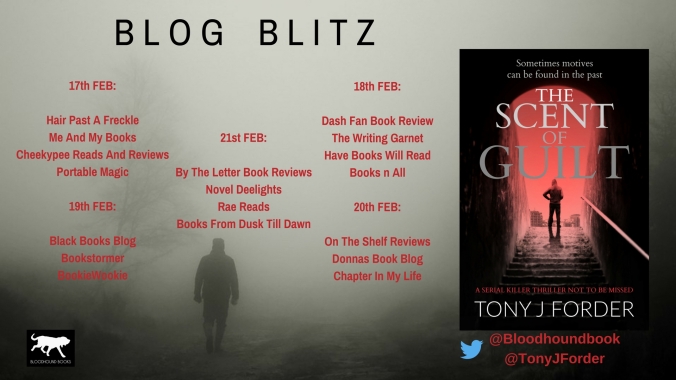 Many thanks for reading my post, if you liked it please give a share.  Or go and get a copy of this book and see what you think 🙂 xx