I am delighted to be sharing my thoughts on this fun cosy mystery book “Andorra Pett and the Oort Cloud Cafe” by Richard Dee. This is available in paperback and eBook format.  My thanks to Richard and also Rachel at Rachel’s Random Resources for my copy of this book.

Meet Andorra Pett; with her trusty sidekick, she’s taken over a derelict café. On a mining station. It just happens to be orbiting Saturn!
She’s hoping for a fresh start, away from all the drama of her old life. It’s a chance to relax and start again in a place where nobody knows anything about her or her past.

But the café holds a secret, and secrets have a habit of coming out; whether you want them to or not. And being accident prone doesn’t help. The more you try to pretend that you know what’s going on, the worse it gets.
Andorra’s plans for peace and quiet get lost amid the revelations and skullduggery and she soon realises that the fate of the whole station lies in her hapless hands.
In space, you can still trip over your feet; the question is, will you land upright?

Andorra and Cyril, (Andi & Cy) decide to relocate to a mining station.  The station is responsible for mining the rocks that make up the rings of Saturn, it has the basics on site that the inhabitants need.  Andi and Cy take over the abandoned “ucky Strike Cafe” (the ‘L’ fell off ).  It’s when they start checking round the premises that they realise it holds a secret, too late to back out now as their customers are arriving.

Oh this is a wonderful cosy mystery.  Andi and Cy have a brilliant dynamic and the author has explored and developed this really well, they are my far my favourite characters.  The others that you meet along the way are in themselves quirky and fun but also there is an underlying feeling of who can be trusted.  Many of them have a secret or two and are not completely honest when confronted about their involvement.  Richard has given really good description of the station, going as far as to explain how it works.  It has a farm, observatory, diner, shops, but he has gone into a bit more detail how the mining and the farm work in unison.  This is not over the top technical detail, but enough that I could follow what he meant.  These sections of the story are a great reminder of the setting and it helps to reinforce that feeling.  The plot was one that had me guessing right through, there are things that caught me by surprise with the red herrings and blind alleys that Richard has expertly lead this reader down.  It has a great amateur sleuthing feel to it with a grand exposing finale that I love.

Described as ‘Agatha Raisin in space’ story, after reading I am in agreement with this statement.  This is a great cosy mystery read with surprising twists, a fun read that I thoroughly enjoyed.  I had a smile on my face when I had finished, a ‘feel good’ read.  This is a book I would highly recommend to other readers. 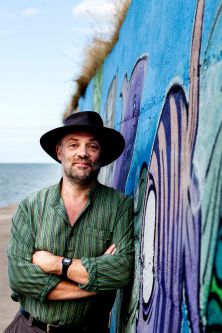 A native of Brixham in Devon, Richard Dee’s family left Devon when he was in his teens and settled in Kent. Leaving school at 16 he briefly worked in a supermarket, then went to sea and travelled the world in the Merchant Navy, qualifying as a Master Mariner in 1986. Coming ashore to be with his growing family, he used his sea-going knowledge in several jobs, including Marine Insurance Surveyor and Dockmaster at Tilbury, before becoming a Port Control Officer in Sheerness and then at the Thames Barrier in Woolwich. In 1994 he was head-hunted and offered a job as a Thames Estuary Pilot. In 1999 he transferred to the Thames River Pilots, where he regularly took vessels of all sizes through the Thames Barrier and upriver as far as H.M.S. Belfast and through Tower Bridge. In all, he piloted over 3,500 vessels in a 22-year career with the Port of London Authority. Richard was offered part time working in 2010, which allowed him to return to live in Brixham, where he took up writing and blogging. He retired in 2015, when he set up and ran a successful Organic bakery, supplying local shops and cafés. The urge to write eventually overtook the urge to bake but Richard still makes bread for friends and family. Richard is married with three adult children and two grandchildren.

Other Titles by Richard Dee:

Many thanks for reading my post, if you liked it please give it a share.  Or go and get a copy of this fun cosy mystery and let me know what you think 🙂 xx