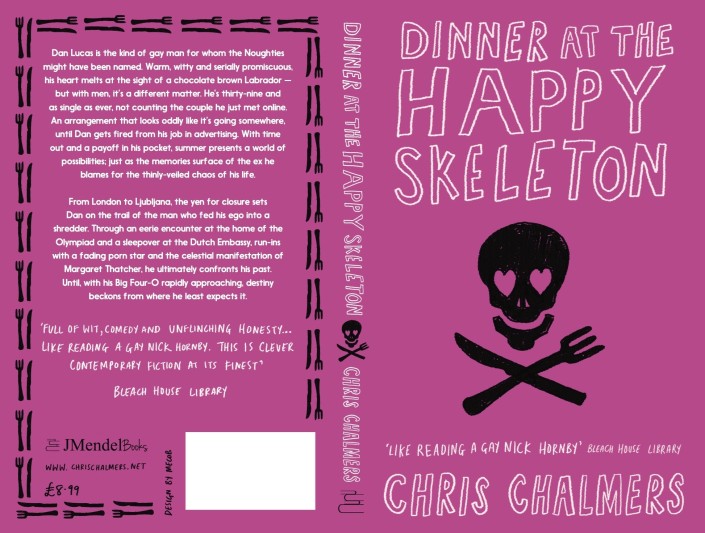 Happy Publication Day today to Chris Chalmers for “Dinner At The Happy Skeleton” available in as an eBook. (2nd Nov 2017), Published by J.Mendel Books

Dan is the kind of gay man for whom the Noughties might have been named. Warm, witty and serially promiscuous, his heart melts at the sight of a chocolate brown Labrador – but with men, it’s a different matter. He’s thirty-nine and as single as ever, not counting the couple he just met online. An arrangement that looks oddly like it’s going somewhere until Dan gets fired from his job in advertising. With time out from his career and a payoff in his pocket, the summer presents a world of possibilities; just as the memories surface of the ex he blames for the thinly-veiled chaos of his life.

‘Full of wit, comedy and unflinching honesty, like reading a gay Nick Hornby. This is clever contemporary fiction at its finest.’ Bleach House Library

Meet Dan, a nearly 40 something about to be made redundant.  Since splitting up with his last boyfriend he has muddled along, between one night stands and surfing the net for his next fling.  He has some great friends that seem to keep him grounded, unless alcohol is involved! Sandra is a work colleague and along with Dan she is also made redundant.  They are both given a payout that gives them a chance to relax before having to get a job, she is married with children and Dan does show more concern for her than for himself. Set in London, this is really the story of Dan.  He comes across as a down to earth man who, like everyone else, just wants to find that special person, his Mr. Right.  He does not seem to have much luck in love.  His last boyfriend’s personality seemed to change as they started to get settled,  and he hovers ominously around the edges of the story.  This is set at a nice comfortable pace, it fits perfectly with the story, it is about love, relationships, opportunity, friendship with wit and humour.

I really liked Dan, he is a sensitive, wary, caring but lonely character.  He has support of great friends like Gina, Duncan, Sandra and his internet chat-room friend Maestroman.  These characters have been wonderfully written, they are memorable.  I imagine they would be an absolute howl to go out for a drink with.  The descriptions of the various settings were very good, and the author does mention that he has travelled a lot.  I am assuming the destinations mentioned in the book are places that he has actually been to, as some of the descriptions have a little bit of an extra to them.  Chris has used his own experiences in the world of advertising to build a more complete picture of Dan, it’s those extra touches that add more depth to the characters, makes them more believable.

I would recommend this book to readers of contemporary fiction.  A refreshing read from the perspective of a man looking for love , this made a nice change, from an almost 40 year old, and his journey through love, life, relationships, with honesty and a good sense of humour to it.

I would like to express my thanks to Chris to allowing me a copy of this great book. My thoughts are my own and are unbiased. 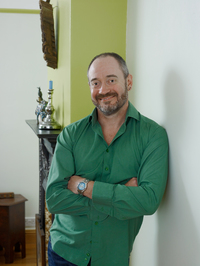 After many years creating advertising campaigns for everything from The Economist to ballet shoes, Chris Chalmers took the plunge into writing contemporary fiction.

His first adult novel, Five To One, about the day a helicopter crashes on Clapham Common, won a debut novel competition run by an indie publisher and was nominated for the Polari First Book Award. His next, Light From Other Windows, explores the effect on a family when the youngest son is caught in a tsunami. Literary critic Suzi Feay described it as a book that “can bring tears to your eyes on one page and make you laugh the next”. A third novel, Dinner at the Happy Skeleton, follows in autumn 2017. For children, he has written Gillian Vermillion — Dream Detective, which like all his work is published by J.Mendel Books.

Chris lives in South-West London with his partner, a quite-famous concert pianist. He has been the understudy on Mastermind, travelled to 40 different countries, and shared a pizza with Donnie Brasco. Publication aside, his most treasured literary achievement is making Martina Navratilova ROFLAO on Twitter.

Many thanks for reading my post.  If you liked it, give it a share.  Or better still go and buy the book.