“Absolution” by P.A.Davies published on 24th October 2017 is available in paperback and also as an eBook.

When the Militia entered the peaceful village of Nyanyar Ngun, South Sudan in 1992 – amidst the backdrop of a bitter civil war – it wasn’t in peace.

Soldiers of the SFL committed untold atrocities in that small farming village, before finally razing it to the ground. From a line of terrified children, boys were chosen to become recruits of the Militia, whilst girls were taken for selling within a market of odious buyers. Those who weren’t selected were either left to perish or murdered where they stood.

In a field of high maize next to the village, sixteen-year old Jada lay hidden and afraid, witnessing the merciless slaughter of his parents and the capture of his sister Kiden; powerless to stop it, too frightened to try.

But now – tortured by grief, consumed with shame and driven by guilt – Jada must embark on a long & arduous journey to rescue his sister from a sinister world and earn his absolution…or die trying!

This is a story of human determination, resolve, character, relentless endeavour, faith and family, but to counter that there is also greed, manipulation, exploitation, murder, misery, depravity and evil.  The prologue gives some indication of what to expect as the author tells of the suffering during the civil war in Southern Sudan and the atrocities committed against it’s people.

This is a story that does not hold back as far as details go.  The author has delved into the world of human trafficking and has built a fast paced thriller around it, with at times uncomfortable reading.   He does not go into too much graphic detail, but enough to build the picture required, but has also remained sympathetic to the subject,  and has not glorified it. The characters have been wonderfully developed, you will soon realise the ones you will loathe just as quickly as those you will love, but then there are also the odd surprises. I am not going to delve into this too much more as I do not want to give away any spoilers.  Just to say that it was a book that made me think about, hours after reading it.

It has multi layered plot, that contains brutal regimes and acts that are heartless and horrific, but  into that is woven a story of hope and family loyalty.  This is a book that will appeal to readers of general fiction and contemporary fiction.  It is quite honest, hard hitting and powerful.  Well written in a style that makes for compelling reading. 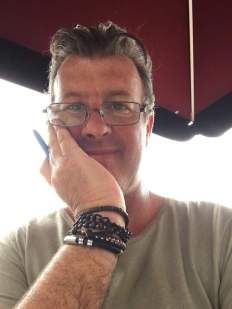 P.A. Davies was born in Manchester, UK, a city he has lived in and around all his life. He loves Manchester and is proud to be part of the multi-cultural, modern city that houses two Premiership football teams and is the birthplace of many a famous band, such as Oasis, the Stone Roses, Take That and Simply Red.

For most of his life, he has dabbled with writing various pieces – from poems to short fictional stories – but this was always just for fun. However, following advice from a good friend he decided to have a go at writing a novel. Thus, his first novel ‘Letterbox’ was conceived, a fictional take on the infamous IRA bombing of Manchester in 1996. It took him over a year to complete but while doing so, he found it to be one of the most satisfying and interesting paths he had ever followed. It came as no surprise that the writing bug subsequently became firmly embedded within him.

To label P.A. Davies’ writings would be difficult because his works range from thrillers to touching novels to true-to-life tales embedded in a captivating story, making P.A. Davies an imaginative and versatile storyteller.

Purchase from Amazon UK or direct from Author Page

Many thanks for reading my post.  If you liked it, give it a share. Better still go and buy this book.