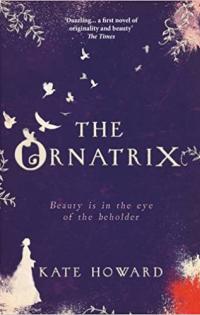 The Ornatrix is available for purchase in Hardback, Paperback or eBook.  Published by Duckworth Overlook in July 2016.

Flavia was born with a birthmark covering her face, in the shape of a bird in flight. A dyer’s daughter, she grows up in a little house in the woods, far away from prying eyes. Ashamed of the mark, her mother makes Flavia hide her face behind a veil on the rare occasions she is allowed to be seen in public. But on the night before her younger sister’s wedding, Flavia does something drastic, something that will draw her into a much wider and stranger world than she could have imagined: the convent of Santa Giuliana, just outside the city walls.

There she meets Ghostanza, a courtesan turned widow, whose white-lead painted face entrances Flavia, and whose beauty and cruelty are unmatched. Flavia becomes her ornatrix: her hairdresser and personal maid. But as white-lead paint rots the flesh below it, the bustling city, and Santa Giuliana, is rotting below the shimmer of wealth and privilege. And Flavia is drawn into a world of desire and jealousy that has devastating consequences.

Set in sixteenth-century Italy and rich in description and character, Kate Howard’s stunning debut novel is perfect for fans of Patrick Süskind’s Perfume, Kate Mosse’s The Taxidermist’s Daughter and Jessie Burton’s The Miniaturist. Painted against a vivid historical landscape with themes and characters relevant today, it tackles issues of belonging, female identity and the perception of beauty and cannot fail to move.

This book delves into the world of beauty and how beauty is perceived.  It is set in 16th Century Italy, at a time when it was fashionable for women to paint their faces in a lead based white paste called “cerussa” and the aim for the perfect face was all consuming.

This is something that Flavia, the main protagonist, would love to achieve.  Having been born with a birthmark in the shape of a bird on her face.  It was looked upon by her parents as being shameful and a mark of the devil, therefore Flavia spent most of her childhood hidden inside, or when going to church, wearing a veil.  Her life changes in many ways, one of the most significant is her meeting and working for Ghostanza.  Falvia becomes her personal hairdresser and maid, she becomes her “Ornatrix”.

This is a story I really enjoyed.  It’s a story that has a message.  It gave me something  to think about after reading.  Also I have learnt something from reading it.  I really liked the character of Flavia, at times she was petulant, jealous, and wilful, but given her history and her experiences it fitted well. It also fitted in with peoples perceptions of those who are different.  Difference seemed to give people the right to ridicule, mock and be extremely prejudiced.  The story also discusses the way cerussa was made, the long processes of having make up applied and the health dangers that came with using the products.  Also there is a character, I will not mention the name, who offers a voice of reason along with his views of beauty being on the inside and not on the outside.

Initially I found Flavia a little difficult to warm to, but this actually makes sense, she is a defensive, guarded character, but as her story comes out  I found myself understanding her and liked her, though not at all times.  There are several other characters from different backgrounds, these give a nice balance and show the the various opinions of society and class distinctions, giving a diverse range of viewpoints.  The settings were wonderfully described, giving me a indicators of sights, sounds and smells that helped build a vivid picture.

This story captivated me and kept me turning the pages.  Many themes discussed are still relevant today, particularly the lengths people will go to for beauty though the methods are different, also the prejudice shown for people who are considered different by society, we all know this still occurs though not to the lengths discussed in the book.

I would definitely recommend this book to readers of historical fiction.  I really liked the  inclusion of society, class and a girl trying desperately to find her place in the world.  I also think it would make a really good Book Group discussion read, there are some great talking/ debating points here.

I was sent his book by the publisher Duckworth Overlook , my views expressed are my own and are unbiased.

Kate Howard has lived in Italy for many years, but now lives in Brighton. She works at the University of Sussex.
The Ornatrix is her first novel.

Many thanks for reading my post.  If you liked it, please give it a share.  Better still go and buy the book.

5 thoughts on “#BookReview : The Ornatrix by Kate Howard pub by @Duckbooks”

Looking forward to starting #MagpieLane by Lucy Atkins before I go to work tonight #booklover #bookworm #bookstagram #bookblogger
Makeover shenanigans... I give you Almost Audrey 2 I now need to watch #littleshopofhorrors 🎥 🎶😍 #postnightshiftfeels
Six Steps to Happiness by Suzie Tullett is a fabulous #romcom read. It’s all about starting again after the breakdown of a marriage. It is humorous, has a fabulous cast of characters and a wonderful plot. #recommendedreading #bookblogger #fiction #romance
How gorgeous are the purple edges for #theplacesivecriedinpublic by Holly Bourne 😍💜 #bookpost #booklover #bookworm #bookblogger