This is the second book I have read by this author, the first being BLOWBACK a prequel that paves the way for the books that follow.  Again we meet Detective “Cadillac” Holland and his team as they have a strange case to deal with.

In the first book Cadillac is called in to help clear up the back log of cases that mounted up after Katrina, and is still on loan and helping. He is called to a case of local rapper Biggie Charles Lynley.  The suspect is still in the vehicle with Biggies body. It is an American Pit Bull, rather than have the dog shot Tulip Holland, Cadillac’s sister, asks that he not shoot the dog, as it could hold vital information to an investigation.  Well Tulip was not wrong, Biggie is an ex-convict but on his release he managed to set up a music studio.  Enquiries lead the team through the life of Biggie and the lives of others around him, it is very obvious that the team are not being told the whole truth.

This story is set 4 years after Hurricane Katrina  and once again Hiller incorporates the devastation that she left in her wake into the story.  He briefly explores issues in the poorer neighbourhoods and projects, mentioning how insurance companies fail to pay out on policies as well as those not being insured because of financial restraints.  For me the inclusion of these details work very well in the main story, it gives something extra as they are peppered throughout, not overbearing but enough, they have been worked very well and not over-used.  The main characters are now starting to make themselves known more, they are very memorable and have been well-developed.

There are various elements going on in this book, they expand on details mentioned in Blowback, such as the reason for Cadillac coming back home after his injury in Iraq, the disappearance of his father, the case itself and obviously Katrina.  It would be easy to think that there could be some confusion, but there is not.  Hiller has a very logical way of telling this story, it makes sense and has a very well laid out style to it.  There is no big fan fare of a conclusion, instead it has simply, logically and naturally been brought to a very satisfying conclusion.

I would definitely recommend this book to readers of Crime, Mystery

I had not come across the word “Garou”, but don’t worry Hiller explains the term.  But I did a little googling and found some rather interesting further reading.

I would like to express my thanks to the author for bringing this book to my attention, my review is my own and is unbiased and honest.

SILVER MEDAL WINNER 2016 GLOBAL E-BOOK AWARDS.
Detective ‘Cadillac’ Holland left the intelligence community and joined the Louisiana State Patrol to find the answer to his father’s disappearance in the wake of Hurricane Katrina. Four years have passed and he hasn’t found the answer. Now his sister wants him to prove that a pit bull is the murder weapon and not the murderer of New Orleans’ most notorious criminal. The dog’s tracks lead to the murder victim’s young son, angry fiancée, and shady bodyguard. The investigation ultimately turns up Federal investigations into a rap music label and a cache of missing firearms, a dog fighting ring, the blackmailing of a famous actress, and exposes far more things about Cadillac’s background than William Avery, NOPD’s Chief of Detectives, ever wanted to know when he assigned the Detective to find a solution to the case which would “reach a conclusion in line with everyone’s perception of justice”. 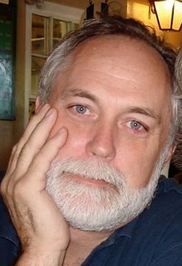 My relationship with New Orleans began with a job cooking in a cafe on Bourbon Street at the age of seventeen. My food service resume now includes many of New Orleans’ iconic music and dining destinations. I no longer reside in New Orleans full-time but I keep to the expat creed of “Be a New Orleanian wherever you are.”
A devoted reader of detective and crime novels, I have worked as a chef on a boat traveling the inland waterways since Hurricane Katrina and began thinking up stories about a detective living in post-Katrina New Orleans, which I now write in my spare time.
My life is divided between working on the water and preserving a Victorian-era home in Hannibal, Missouri that I share with my wife and our rescue pets, which include a neurotic wolfhound/terrier mix and too many cats.

One thought on “#BookReview : THE BLUE GAROU by H.MAX HILLER”

I Read (a lot) and then Rant, Rave and maybe Review