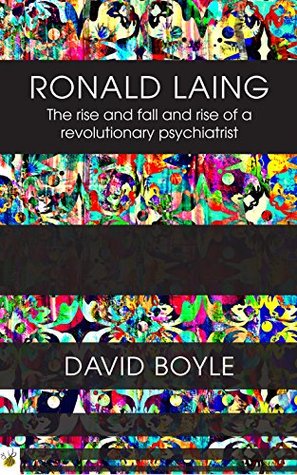 This is not my usual reading genre, but after seeing it around and also reading a fellow reviewers blog, I decided to give it a go.

This story charts the rise of Laing, from large audiences and followers who listened to his ideas on mental health reformation, to the depressed LSD drug taking, alcoholic who occasionally got into fights.  The treatment of patients in Mental Institutes was cruel and inhumane.  He disagreed with the practices and fought to change them, disagreeing with the use of ECT, Electro Convulsive Therapy, No talking policy and lobotomy’s.  It is mainly schizophrenia that is dealt with in this book,  and charts his alternative ideas he had on treatment. Laing was born in Glasgow, his grandfather and father had mental problems in their 50’s, his mother seems to always have had problems.  His use of LSD was to relive past memories, his alcoholism didn’t stop until almost the end of his life.

This is a well laid out book and a lot of things have been explored in it, but only scratching the surface.  I feel it would be a good book for someone of little knowledge of psychiatry and there is not an overuse of jargon.  It is a basic account of Laing, his theories, beliefs and work.

The radical psychiatrist R. D. Laing took the world by storm in the 1960s and 1970s with his ideas about madness, families and people’s need for authenticity. At the height of his fame he could fill stadiums like Bob Dylan, and often did so. He became an icon of the movement that held psychiatry to be an agency of repression, his phrases on a million hippy T-shirts. Then he fell from grace, flung out of the medical profession, and his influence has been waning since. His basic ideas have been regarded as having been discredited. Yet, despite this, his influence is also everywhere – but largely unnoticed and unremarked.

This book tells the extraordinary human story of his struggle, first with the authorities as a psychiatrist in the army and then a series of mental hospitals. It explains his extraordinary influence in the context of the upheavals of those psychedelic days – and it looks at what we can still learn from Laing today. Boyle finds he still has an unexpectedly potent message.