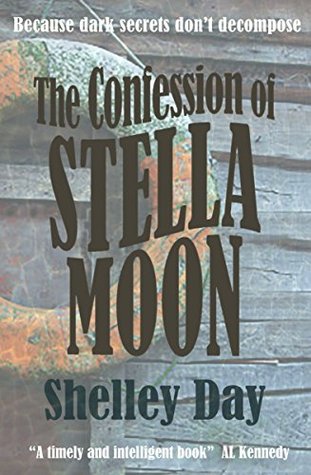 I received this book in a giveaway run by Kelly Lacey @Lovebooksgroup and the author Shelley Day.  My review is honest and unbiased.

When you first meet Stella Moon it is in the form of a confession.  She confessed to murdering her mother, Muriel Willoughby Moon in 1970.  She is released in 1977 and this is where the story of what led her to do what she did.

Stella was brought up by her grandmother Ruby Willoughby, when the courts found Muriel unfit to look after Stella, they awarded custody to Ruby.  Stella’s story is a complicated one, there has been a lot of horrible things that she has gone through, and in fact is still struggling to understand.  She is haunted by things she can remember, as well as those gaps in her memory that are blank.

She has to deal with her past to be able to step forward in her life.  She is going to have to deal with memories that have been deeply buried, memories that are terrifying, horrible, strange and also with the guilt that comes with them.  The guilt she carries for her mother and others.  She will need help and she does get it in the form of a social worker, Gareth, who ends up stepping into something much bigger than he realised.

I really liked this book, there are so many layers to this book.  The stories that gradually emerge are very cleverly linked.  The characters are very well written, and are convincing.  It is a story that shows a journey of discovery, of growth and realisation. Sometimes what we think happens, is different from what actually happened.

I would recommend this book to readers of general fiction as well as crime, mystery and thriller.

A timely and intelligent book’ – AL Kennedy. 1977: A killer is released from prison and returns ‘home’ – a decaying, deserted boarding house choked with weeds and foreboding. Memories of strange rituals, gruesome secrets and shame hang heavy in the air, exerting a brooding power over young Stella Moon. She is eager to restart her life, but first she must confront the ghosts of her macabre family history and her own shocking crime. Guilt, paranoia and manipulation have woven a tangled web. All is ambiguous. What truth and what lies are behind the chilling confession of Stella Moon?